What is the Best Analog Alarm Clock To Buy In 2022?

In a world where rely heavily on technology, we rarely think about what would happen if the power was to go out. We still need to be able to know what time it was or, more importantly, wake up to go to work.

Your smartphone would only have so much power before it shuts off completely and you’re left without knowing the time. Or, maybe you want to disconnect completely from technology.

The best analog alarm clock can save the day because they are battery powered and they keep time very well. In this guide, we are going to provide you with three great analog travel alarm clocks that would be a great option for when you’re without electric or to use while traveling.

What is the Best Analog Alarm Clock? Keep reading to find out!

The Marathon Classic Alarm Clock is a non-digital alarm clock that seamlessly blends sleek style with practical functionality. This clock features a silent second hand that continuously moves with a quartz movement. This is the best analog alarm clock for those who are light sleepers who need perfect silence when they are falling asleep – or just do not like the ticking sound. 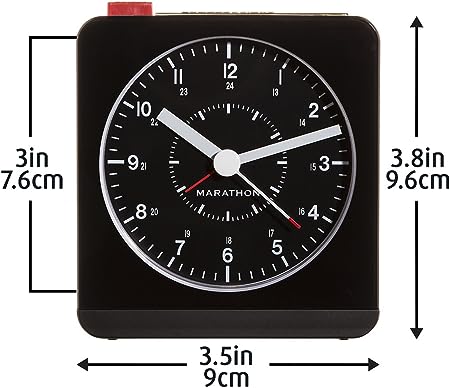 The clock features a light that will illuminate the face so that you can easily see the time in the middle of the night. The light isn’t so bright that it will keep you up at night. When the alarm goes off, you don’t have to worry about trying to find the off switch (or the heavenly snooze button) because they are located right on top.

Notable features of the Marathon Classic Alarm Clock include:

When looking at what people had to say about the Marathon Classic Alarm Clock, they had great things to say. Customers purchased this clock because they wanted a reliable device that they could depend on.

They especially appreciated how little space it took up on their bedside table, but also that the face of the clock was large and the light illuminated it just enough so that they could see the time in the middle of the night. Customers appreciated the two long-lasting AA batteries that comes with the unit and they liked that they didn’t have to replace the batteries often.

There were some people who were not as impressed with their alarm clock. They felt that the light wasn’t bright enough for the clock to be seen from across the room. They also didn’t like that when the light was on the highest setting, it was still too dim.

Others reported their clocks stopped working only after a few days. Even when they received replacements, those clocks were either broken or the alarm stopped working.

Seiko is a leading name in the clock industry, so it should be no surprise that the Seiko Bedside Alarm Clock is on this list. This alarm clock is 5 inches wide, which allows the face of the clock to be seen and easily read at any distance.

The modern design features a large dial with luminescent hands to make it easy to read the time. Because this alarm clock is meant to be as a bedside clock, it does not tick. The silent sweep second hand ensures that you’ll be able to get a comfortable night’s rest. 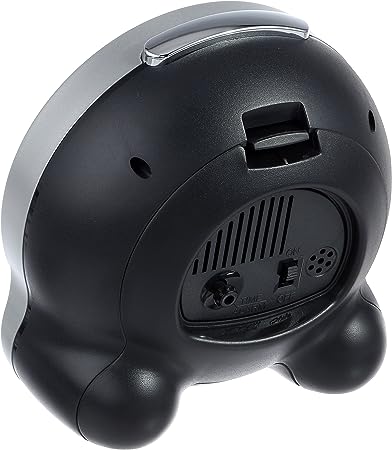 What is unique to this alarm clock is that you can adjust the volume of the alarm, but also have several alarm settings as well. There is a snooze function, much like other old fashioned alarm clocks, and it can give you those few extra minutes of sleep if you need it. This clock runs off of one AA battery, which is included in the box.

Notable features of the Seiko Bedside Alarm Clock include:

When looking at what people had to say about the Seiko Bedside Alarm Clock, they had great things to say. People liked that this alarm clock keeps time very well and it doesn’t tick. People appreciate that the look of the clock is somewhat “retro” but it has an obvious modern edge due to the silver and black design.

Customers appreciate the size of the clock and they especially like that the numbers and hands are luminescent and large enough to be seen from the other side of the room. A few people also commented that they liked that the alarm on this clock was an actual bell and not a beep or some other noise.

While the majority of customers raved about this clock, there were some who were less enthusiastic about it. These customers were disappointed that the volume control for the alarm doesn’t offer a large enough range. One person said the volume goes from loud to not-so-loud.

Others commented that despite the clock being rather large, it feels very lightweight and cheap. One reviewer reported they accidentally knocked the clock over and the hands came loose and there was no way for them to fix the clock.

The Braun Classic Analog Alarm Clock is one of the best mechanical alarm clocks because of its simplistic design. The clock is a great option for those who like to get away from technology and relish in the peacefulness of the great outdoors. The clock is created to be a durable device that can handle being tossed into a rucksack without getting damaged or failing to keep proper time. 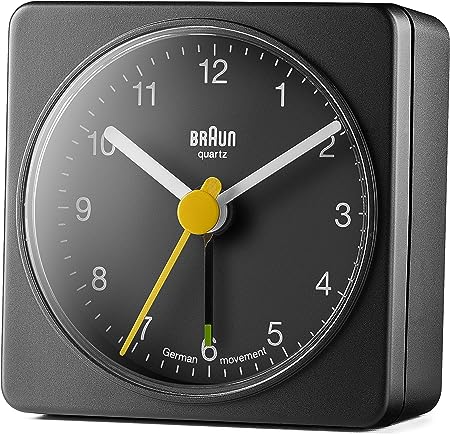 With this clock, you only need a single AA battery to keep it working. The hands and numbers on the clock are a bright white so you can see them clearly against the black face. If you have a habit of sleeping in a few minutes longer after the alarm goes off, you can easily press the snooze button. To turn off the alarm, you just have to switch the on/off switch.

Notable features of the Braun Classic Analog Alarm Clock include:

When looking at what people had to say about the Braun Classic Analog Alarm Clock, they had great things to say. Many customers feel that this is the best analog alarm clock that they’ve tried. Customers reported that they mainly use this clock to travel with and they have never had any problems with the unit.

They liked that it is lightweight but durable enough to take it with them when they travel. Some have commented that while the clock does tick, it would need to be right on your ear to hear it. When it is on the bedside table, you cannot hear the ticking at all.

Despite the numerous positive reviews, there were some people who felt let down by this alarm clock. Customers commented that they would have liked the clock better if the face lit up at night. Others said that the knobs on the back of the clock are difficult to use because they are so small.

A few people remarked that the alarm itself isn’t very loud. This could be a problem for those who are heavy sleepers and need a loud alarm in order to wake up.

What To Look For When Buying The Best Analog Alarm Clock

There are many analog alarm clocks out there, and choosing the best one isn’t just about which clock looks the best. You have to think about how it looks, yes, but you also want to consider other factors. Here are the top features you should look for when choosing the right alarm clock for your needs.

Our lives are hectic as it is, and it only gets worse when you’re running late because you missed the alarm because of a power surge or something happens and your digital clock or your smartphone just don’t go off. An analog alarm clock is an excellent back up plan because all you have to worry about is setting the time you need to get up and making sure you replace the batteries periodically. 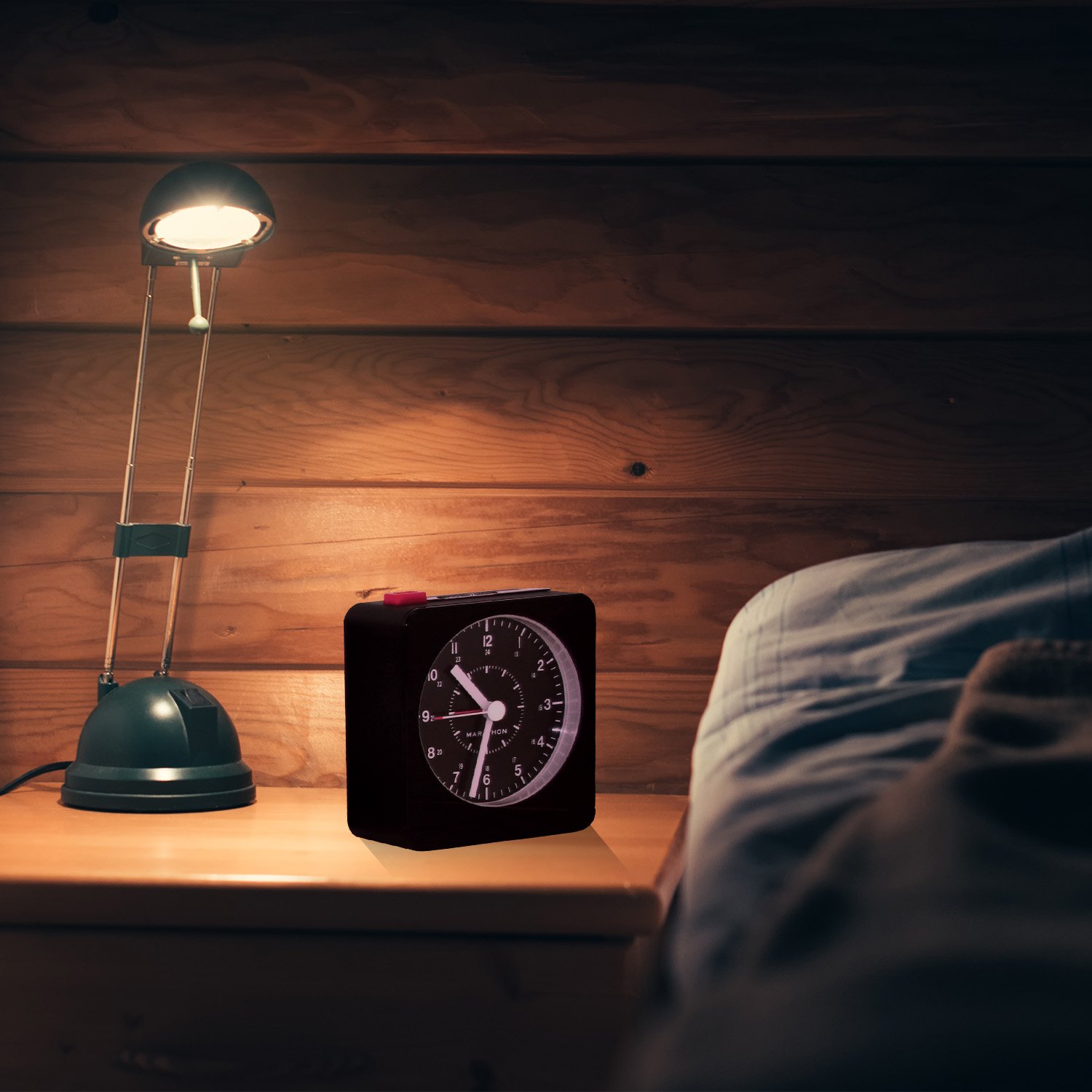 Of these three analog clocks, we feel the Marathon Classic Alarm Clock is the best option. It’s affordable, has a sleek design, and the necessary buttons (on, off, and snooze) are right on top. We also favor this alarm clock because it is silent! You never have to fret over a ticking clock like Captain Hook and you can sleep soundly at night.

With any of these clocks, you can rest assured knowing you’ll be able to wake up in the morning, no matter what.