Commonly known as “Hell on Wheels” by most of its users, this is the kind of alarm clock that is hated as much as it’s loved. When regular alarm clocks no longer seem to do the trick, and hitting the snooze button is something you do while still half-asleep, then you may have to step it up a notch. 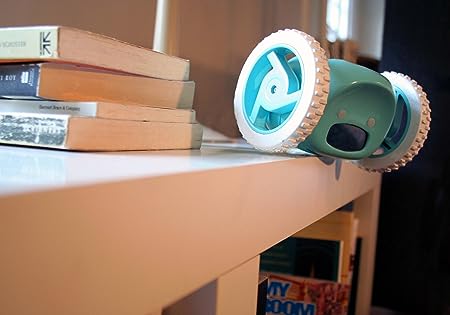 This is why Nanda Home came up with Clocky, the alarm clock on wheels that will jump off the nightstand and roll around the room while ‘singing’ you the song of its people.

Clocky is made specifically for those who struggle with getting out of bed every morning and are extremely prone to hitting the snooze button very often. Since we end up oversleeping due to the excessive pressing of that button, Satan Nanda Home said: let’s put wheels on the alarm clock!

And this was how one of the evilest alarm clocks was born. This alarm clock won’t start wheeling off right away; when it goes off, it stays in its own place. However, the moment you hit the snooze button, Clocky will jump from the nightstand and will start rolling around and beeping until you get up and turn it off yourself.

Here Are The Main Features Of This Alarm Clock

Since you’ll have to wake up in order to turn off the alarm clock, this is a very efficient device to prevent oversleeping. No one can sleep through such a loud noise – unless you really are a zombie.

We known about Clocky for a while now, from a commercial that Nanda Home made. It all looked pretty cute, and aside from it rolling around a lot, we didn’t think there was a lot to it – until we tested it. 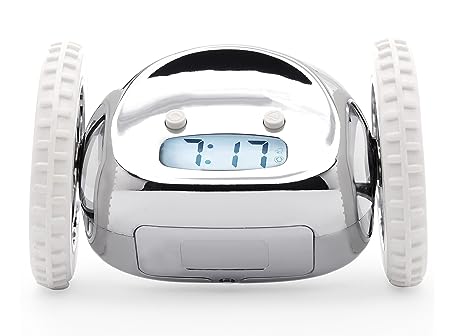 No one could prepared us for the racket that this clock can make the first morning that the alarm went off. People have this habit of continuously hitting the snooze button until at least half an hour has passed – and then they leave in a chaotic hurry.

Out of reflex, we hit snooze on Clocky as well; it then stayed there for a couple of seconds, and then we heard a loud “thump” followed by a series of random loud robotic sounds. The next thing we know, we were out of bed, running after a clock that hid under a drawer. By the time the whole ordeal was over, all sleepiness had gone away.

This is the kind of alarm clock that you just love to hate. But regardless of the fact that we wanted to throw it out the window, we actually woke up on time and had time to drink coffee and have a proper breakfast. Running around isn't a thing anymore because we were no longer late.

Clocky has sturdy construction and he will wake you up every morning with that alien-sounding tune. You can now start waking up directly, without hitting snooze, out of fear of having to run around for it again.

What Other People Say

If you start reading reviews on the Internet, you’ll notice that everyone refers to this as “one of the evilest alarm clocks that humanity ever made.” We can’t disagree with them on that. Its cuteness is probably the only thing that keeps it from being turned into pieces.

Nonetheless, as much as they hate the Clocky’s ‘guts,' they also love its efficiency. It won’t let you fall asleep – especially after giving you such a good workout. Everyone has a love/hate relationship with it.

It gets us out of bed! That’s the favorite thing about this clock. If you even dare to press snooze, hell breaks loose – and you'll be awake on time. Plus, the design is very cute, and it comes in various colors. It’s really like having your own robot.

Aside from the fact that we are pretty much sure that you will want to murder it every morning, there’s not much to dislike about this alarm clock. Perhaps if it had a Bluetooth connection that you can put your own alarm tones or at least have more sound options – but customers weren't bothered by the absence of it.

There is the issue that the stop button is very close to the snooze button. If you aren’t careful enough, you might hit stop instead of snooze, and will fall back asleep without even knowing what happened.

As much as you hate it, you also love it for the fact that it does its job. Indeed, it will annoys you out of bed – but it would get you up. You will be attached to the Clocky after a while. That's for sure even if it drives your family nuts.

If you ever see that a colleague of yours is running late for work because he or she overslept, you need to give them a Clocky. They will hate you for it for several months, but eventually they will probably want to thank you. Probably.